You haven’t truly explored a city if you haven’t gorged on food that locals swear by. In Holland, the reigning Dutch flavors are most subtle, raw and basic. To best explore the culinary offerings of the Dutch capital, we signed up for the Eating Amsterdam- Jordaan Food tour hosted by Eating Europe.

We wanted to be well acquainted with the local favorite dishes & where to find them.

This tour was centered in the Jordaan neighborhood, very close to the Amsterdam city center and was going to be about more than just the food and drinks. 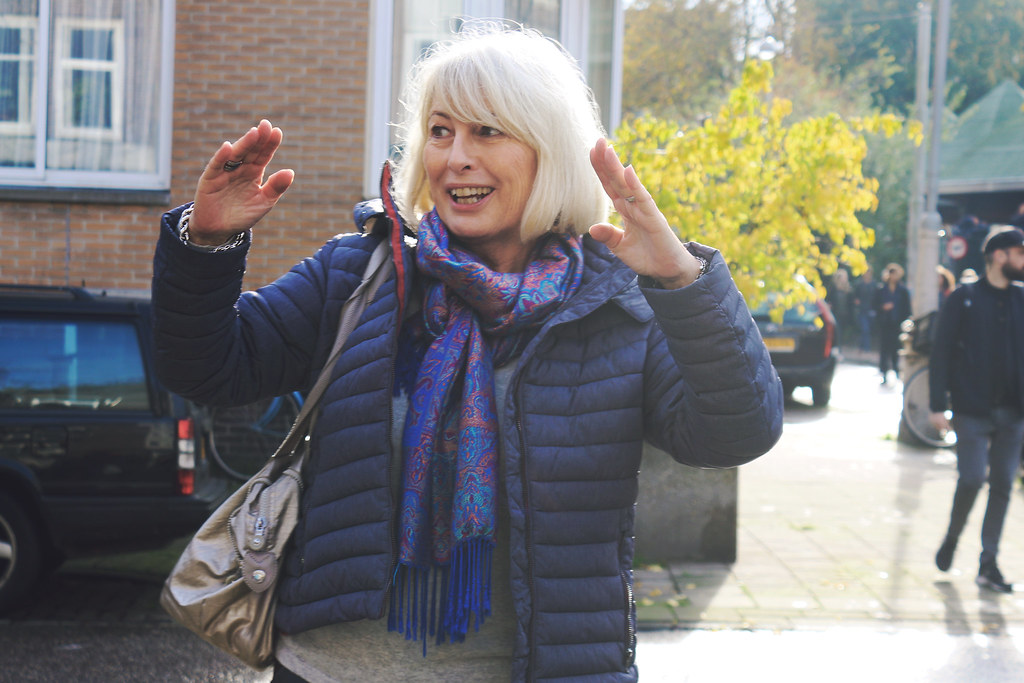 We met our tour guide Marjolein, a Dutch local from the city who was going to show us around the Jordaan district, with some of the best delicacies and eateries in the area preferred by the locals.

Our meeting spot and our first stop for this food tour was the canal side Café Papeneiland near Prisengracht in the Jordaan neighborhood of Amsterdam. This café is known to sell some of the best Dutch Apple Pies in the city. 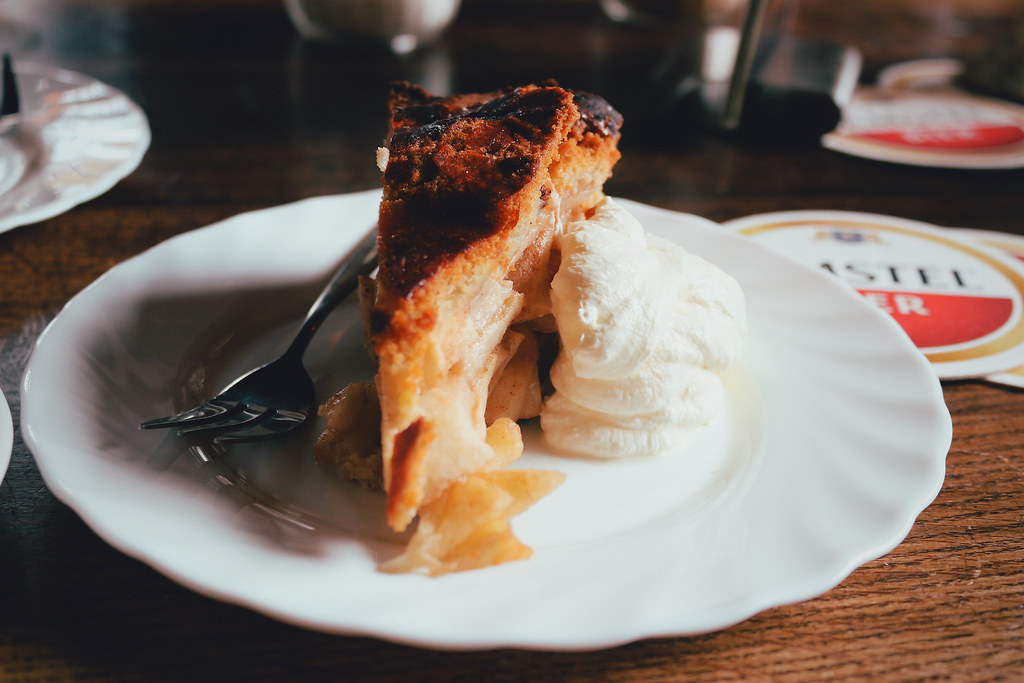 For someone who’s not exactly a dessert person, a strong cup of black coffee is just enough to get the day started. But when you’re asked to just take one bite of the freshly baked Apple Pie kept right in front of you, you tend to forget what time of the day it is. 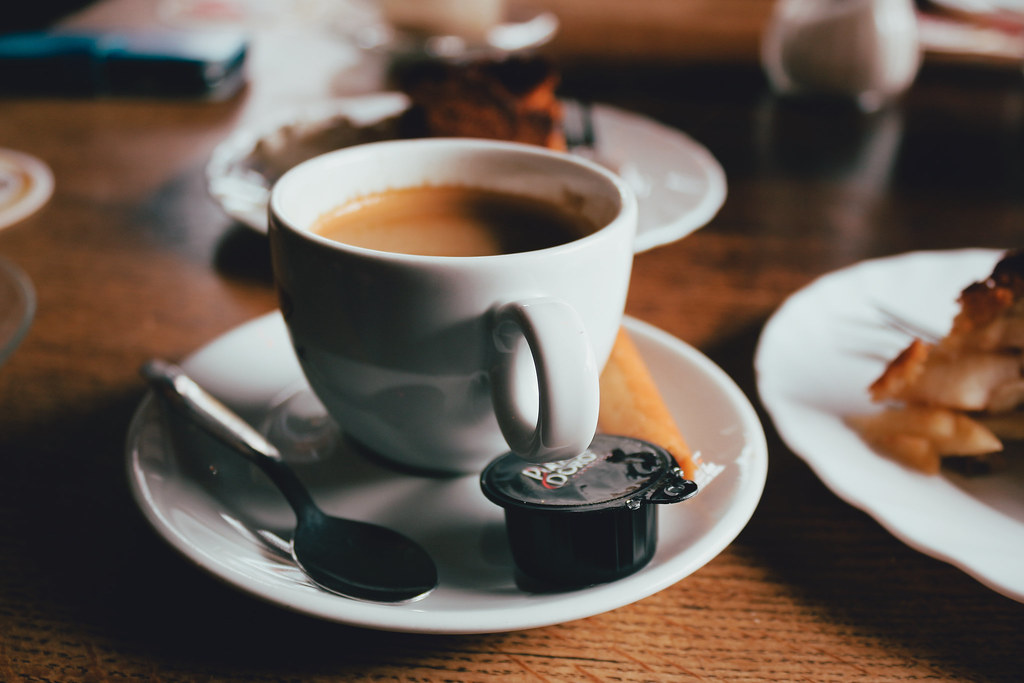 After all, the traditional Dutch Apple Pie is not your typical extra sweet dessert. It’s sweet, with chunks of apple, subtle flavors of cinnamon and freshly baked bread. And to be honest, it was love at first bite.

You could pair it with a cup of coffee or the special mint tea at the Café Papeneiland. 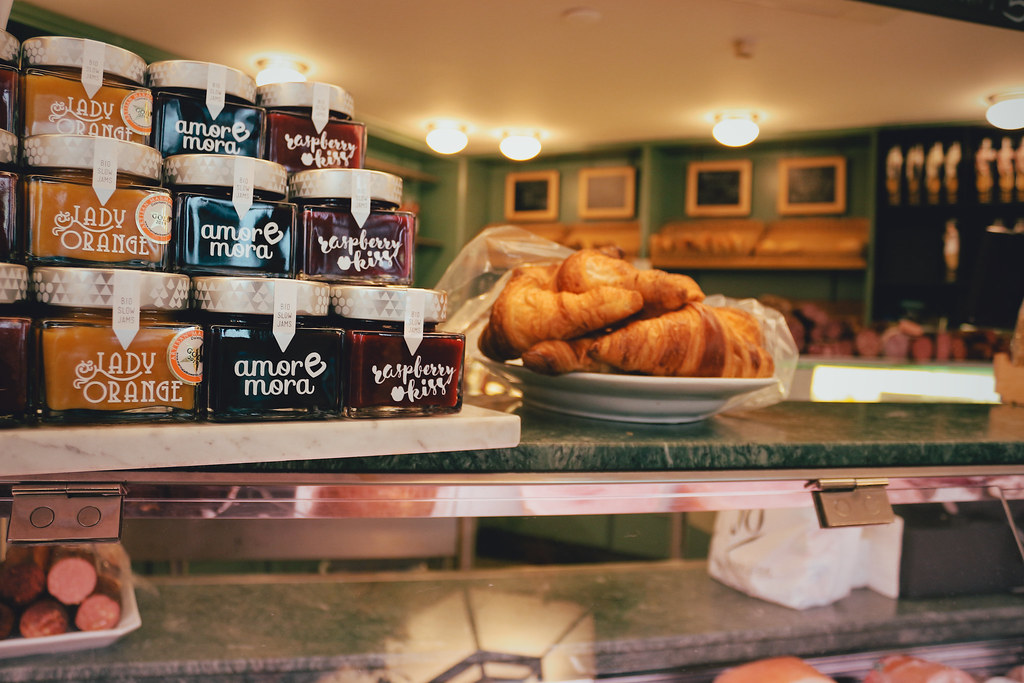 The Dutch Cheese, especially the one produced in the city of Gouda has quite a reputation across Holland. Our second stop on the tour was to taste some cheese variants popular in the region at the JWO Lekkernijen. This quaint little deli is known for its production of artisanal cheese. 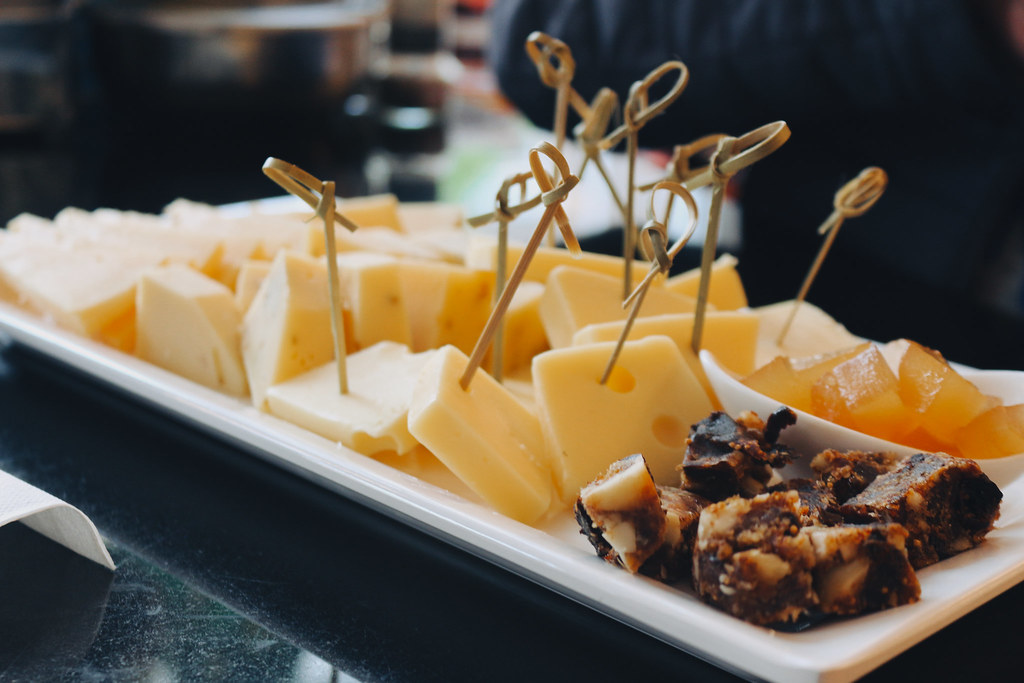 For the Old Cheese and Komijenekaas, we were also served a dip with a tinge of ginger to pair it with.

Whether a cheese person or not, the cheese tasting was worth the shot. Especially because Dutch Kaas is not very similar to the French or Italian variants.

After some cheese tasting, we headed straight to a family-run butchery that has been in the business for over a century- VOF Butchery Louman. This well-kept butchery promised some of the best-smoked sausages in the city and they were not wrong about their promise. Trying on the variants of cured and smoked sausages at the butchery was indeed a treat for the meat lovers. 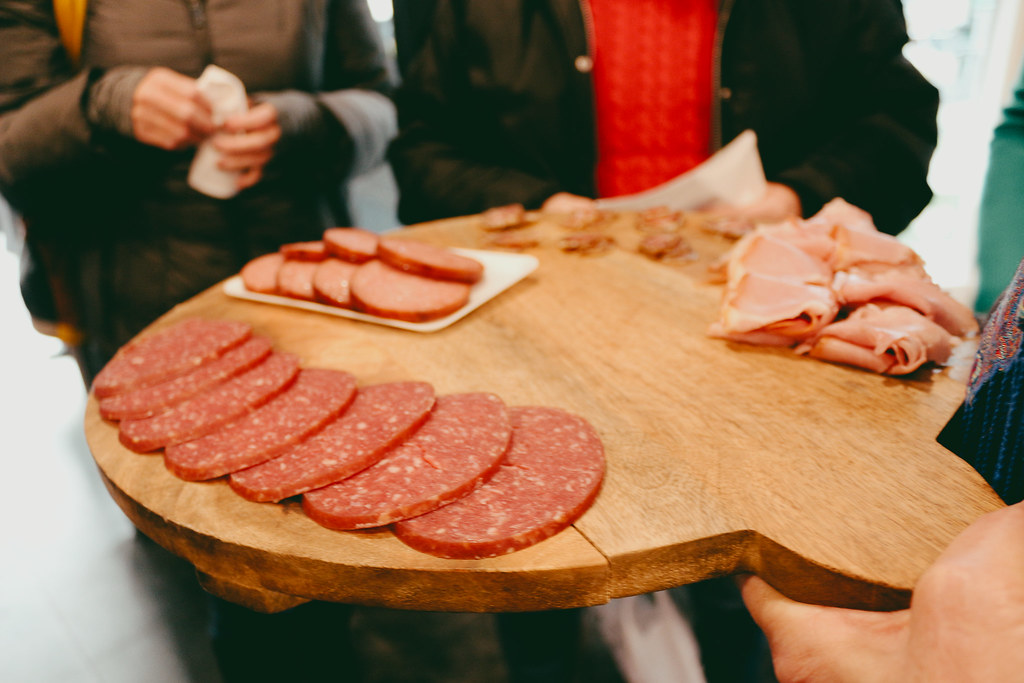 Three stops down, we slowed down to stop in the sunny corners of the Jordaan neighborhood to get a better understanding of this area and its history. Our guide Marjolein had come prepared with her answers, ensuring not just stomachs but even our curiosity was fed well.

Want to visit Amsterdam? Read our complete guide to Amsterdam to start planning!

Stop no 4 was a little fishy! Now I had always imagined trying the Dutch Herring by a street-side stall. Change of plans, I guess! We stopped by this little place called Zeewaters in the Jordaan neighborhood to try two of the key fish dishes in Holland. 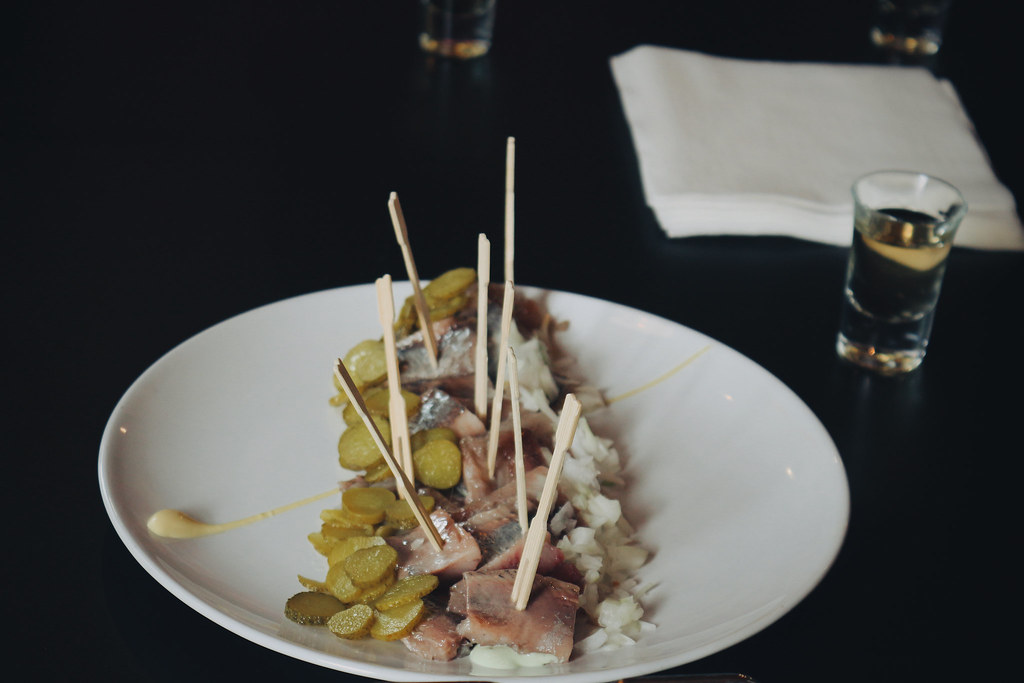 The Traditional Dutch Herring was served to us in a plate with chopped raw onion, ginger-garlic paste on top of a raw herring fish cured in salt along with some pickles. The fish was soft, without any odor and the support elements like the onions, the ginger-garlic paste and especially the pickles complemented the subtle flavors of the Traditional Dutch Herring. As Marjolein told us, this was the Amsterdam style of having the Herring. The style varied across different regions of the country. 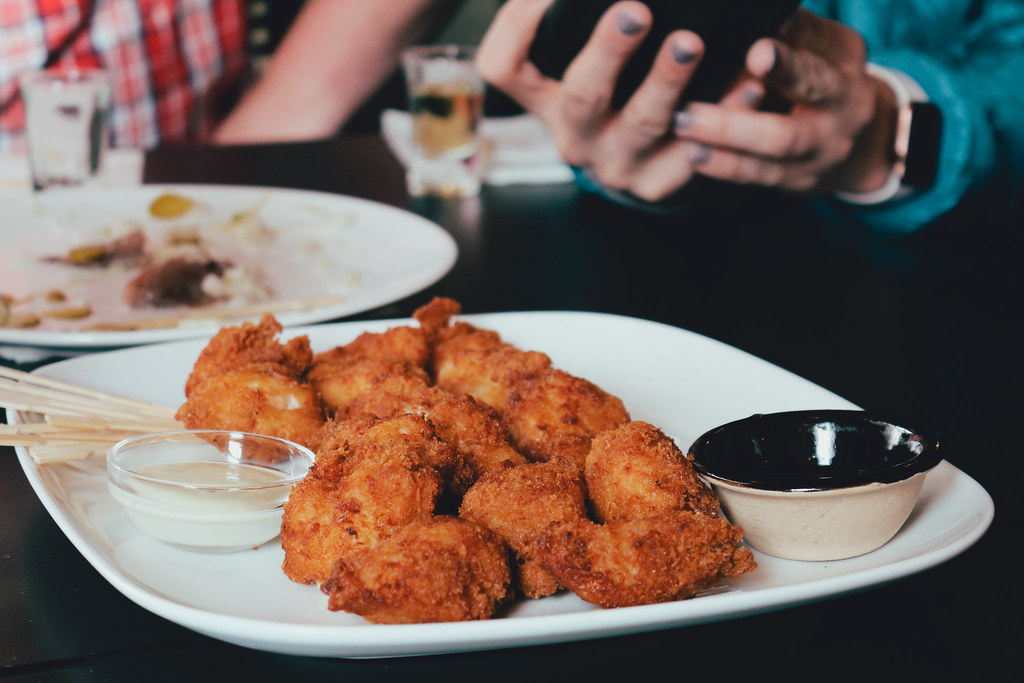 After devouring the Herring, we got some fried cod-fish called ‘Kibbeling’ which was served with the tartar sauce and a mint and chili dip (much like Indian Green Chutney). Just like all things fried are always delicious, the Kibbeling was an instant hit and we didn’t stop till the plate was all clean. 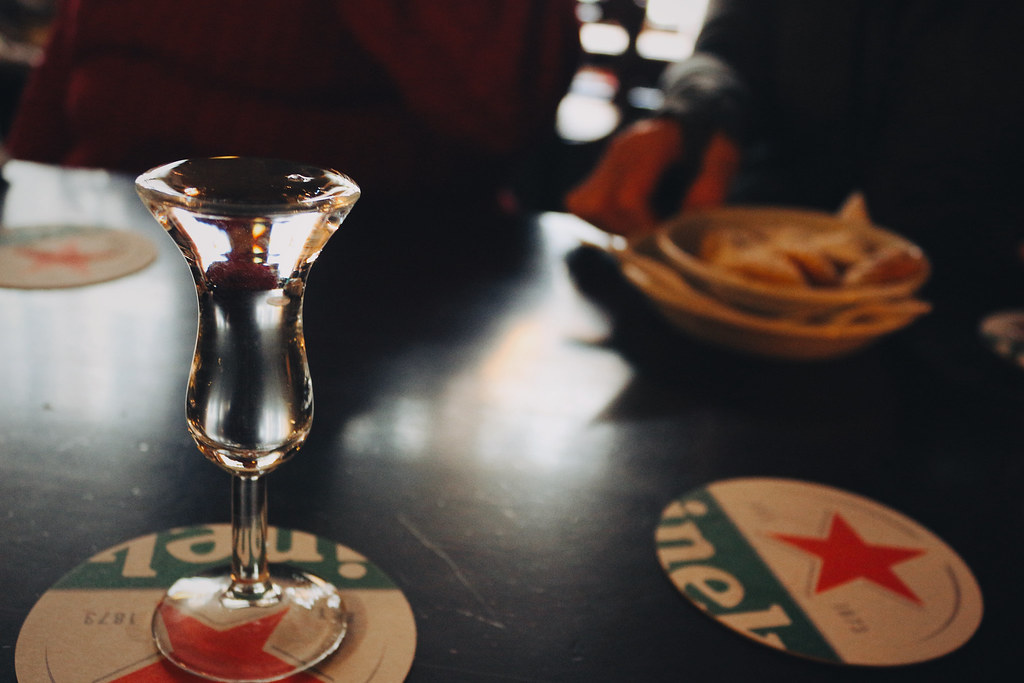 Paired with the Traditional Dutch Herring was the ‘Genever’ also known as the Dutch Gin equivalent. Shots of this distilled alcohol variant with 38% alcohol are said to go very well with the Herring. We tried as told, after all you can’t say no to local traditions, can you?

You can already guess who was having a great morning! 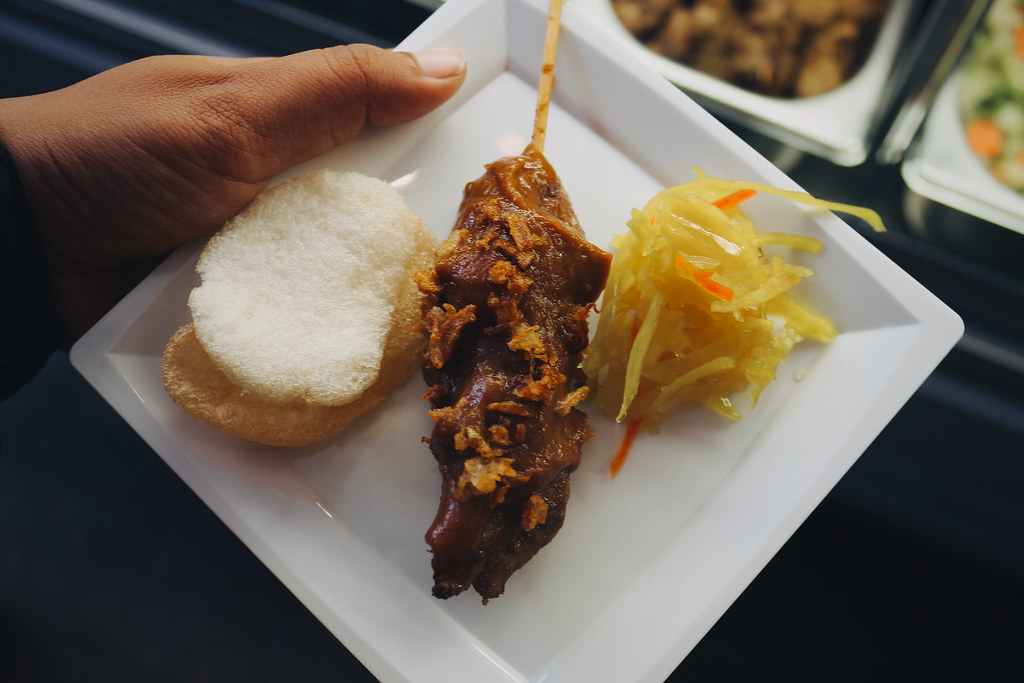 Back in the day of colonization, Indonesia used to be a major Dutch colony. Today, the flavors of Indonesia continue to entice the modern Dutch foodie. We visited the Indonesian take away joint Swieti Sranang in the Jordaan district to try some of their best delicacies. According to Marjolein, this joint had the best Peanut sauce in all of Amsterdam. So, we tried the Satayam Chicken (Chicken skewers in Peanut sauce) and the Prawn Crackers which were absolutely addictive and tasty. 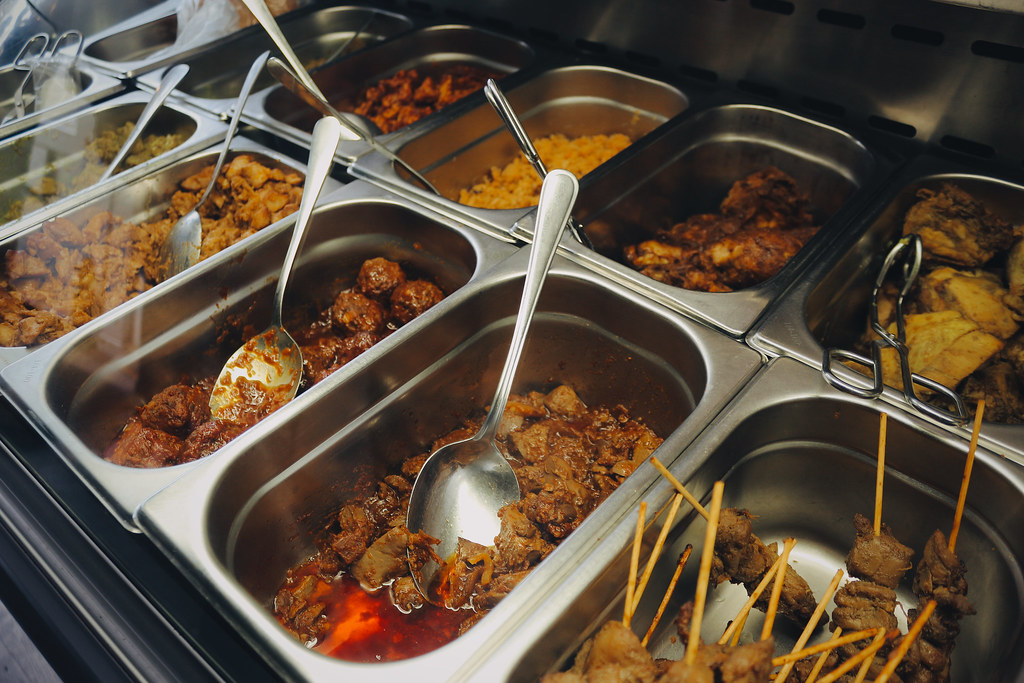 The Jordaan neighborhood of Amsterdam seemed to make for quite a gorgeous picture as we kept walking past the lanes with restaurants, cafés, and independent fashion boutiques. The bricked streets, canal bridges, trees and flowers by the roadside and of course bikers’ who would appear out of nowhere was the visual that was growing on us through the duration of this tour.

Tom’s Bread & More was a little bakery by the corner with aromas of freshly baked biscuits and bread attracting visitors from outside. As we stepped in, we were curious to see what we were going to try! And we figured it was STROOPWAFEL time.

There’s nothing more Amsterdam than Stroopwafels when it comes to food. And were handed some extremely thin, fresh out of the oven wafels with hot caramel sauce squeezed in between. The wafel hadn’t even hardened by the time we started eating it. And that moment felt divine in every sense! 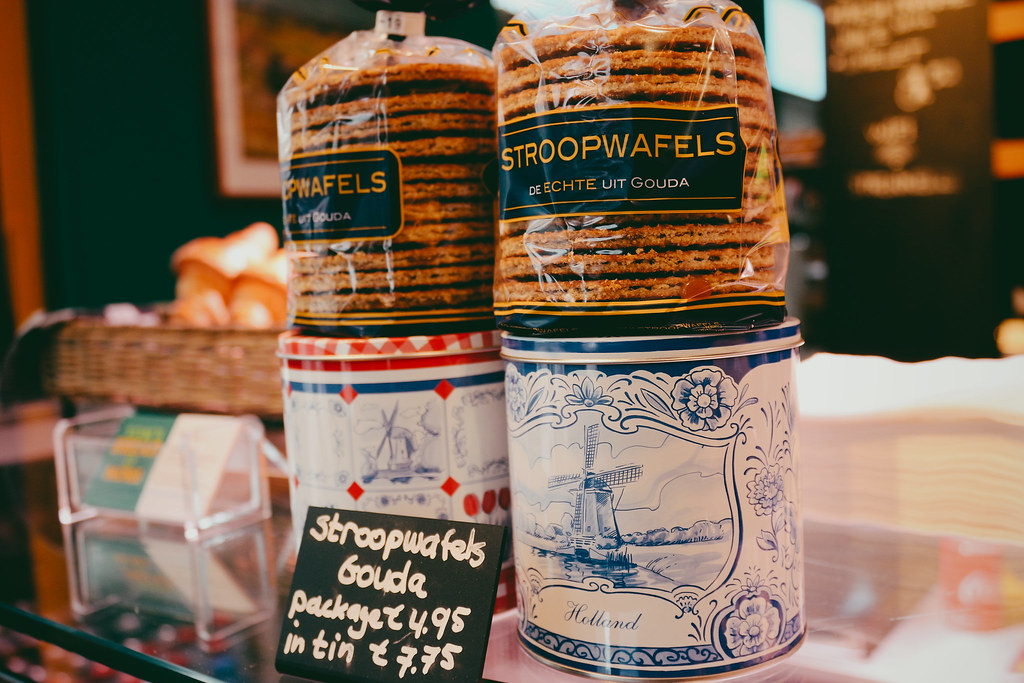 Only when you taste a Stroopwafel you’d know why the Dutch swear by it so much.

After over 3 hours of walking and eating, we were headed to the last stop of our tour. We were walking by the gorgeous canals of Prisengracht all over again and the view was stunning. We were secretly hoping to sit by the canal here and enjoy a cup of coffee. But first, for the final dish.

By the side of the Eglantine canal was Café t’ Smalle was a traditional Dutch pub which looked exquisite on the inside with vintage architecture. You could tell that this place had been around for quite some time! The origin of this former liquor distillery and tasting room dates back to 1786. With its waterside terrace, you cannot imagine it being anything but a popular spot amongst locals. 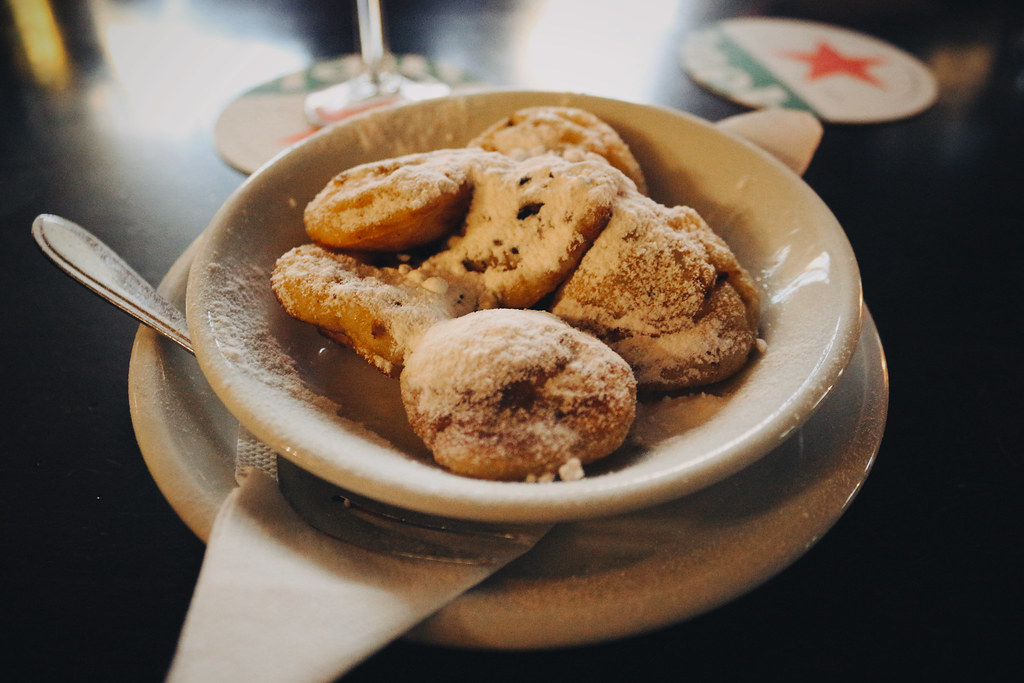 We were here to try the traditional Poffertjes or mini pancakes that the locals’ absolute love. These were accompanied by some more Genever.

I am still unsure if it was the making of the soft, sugar sprinkled Poffertjes or the Young Genever served along that made this experience an incredibly unforgettable one. Before we went our way, we sat longer in this lovely café bonding over Amsterdam, travel, food, and culture with the fellow members from the group and the lovely Marjolein.

Major props to the lovely Marjolein who was a patient and well-read guide on this tour. She shared with us all that we needed to know and answered all that we wanted to ask. 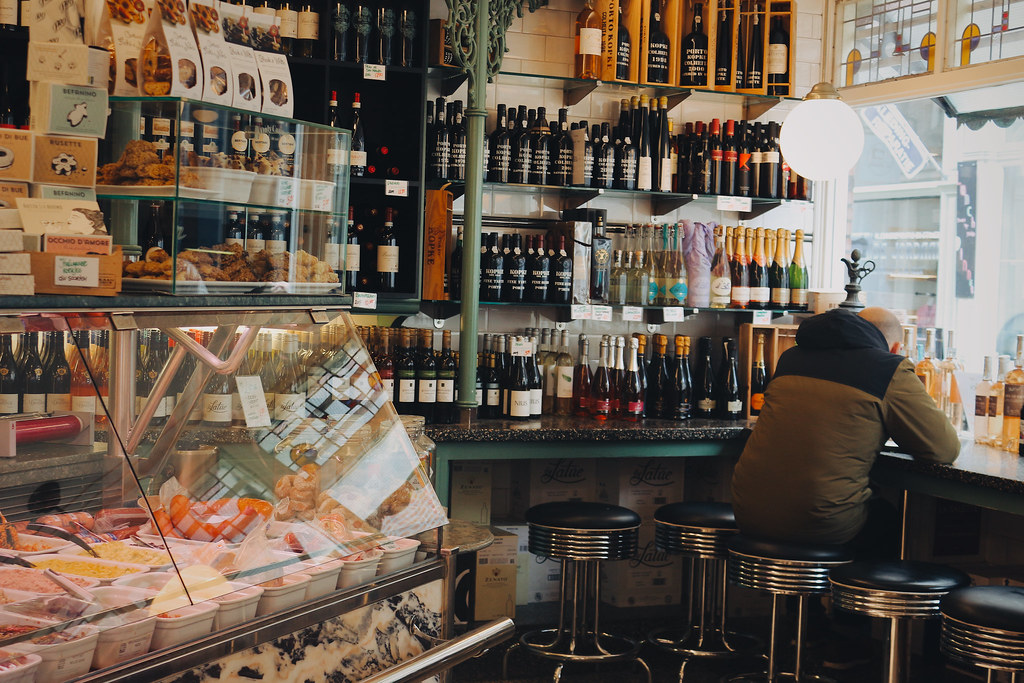 The restaurants curated for this tour along with the portions served with apt to keep us going through the tour till the very end.

While the tour was not exactly vegetarian-friendly, but Parichay was given available alternatives wherever possible.

Above all, this tour helped us understand a lot more about culinary Amsterdam, the history and the culture of the city, Dutch people, and their preferred flavors. Making the 4 hours look we spent look more like an investment. 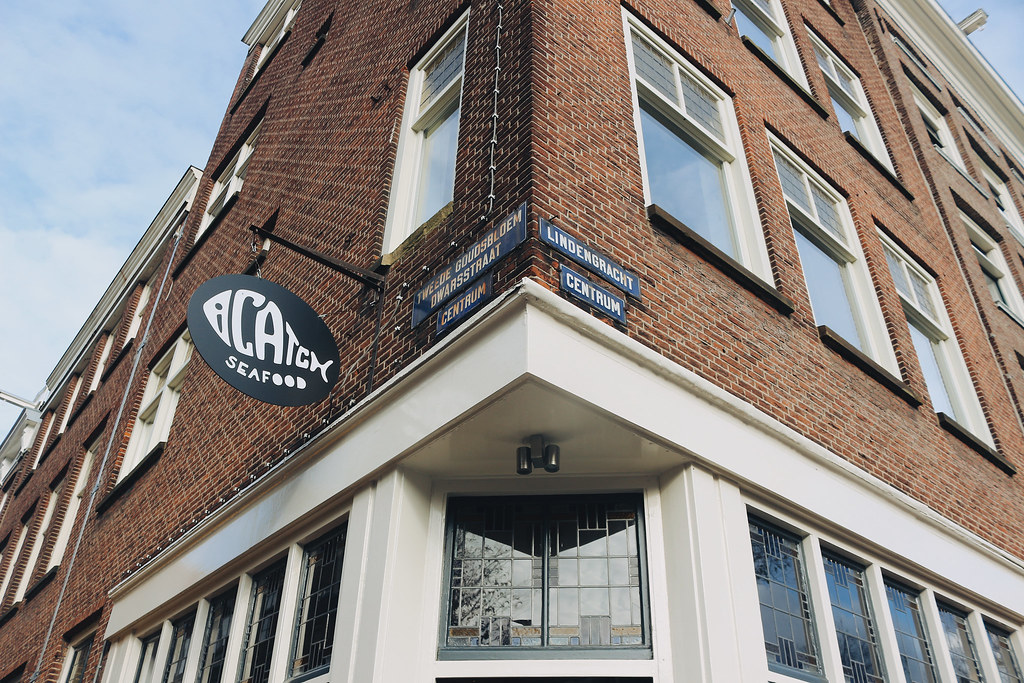 Whenever you’re in Amsterdam and want to explore the local food and flavors, consider taking this tour. We highly recommend it for not just the food but for a better understanding of the city, it’s people and its culture.

If you have any favorite Dutch delicacies or cafés/restaurants/eateries in the city that you’d like to recommend, feel free to comment with your suggestions below.

Disclaimer: We were invited by Eating Europe to experience this food tour in Amsterdam. As always, the opinions and experiences expressed are purely personal and true.